Cloudy and overcast with light rain.

This week I wanted to get out with Nicholas who always loves a hiking adventure. We set out Saturday night to spend the night and get started early on Sunday. We found an amazing spot on the other side of Gale River where we set up our sleeping arrangements and went to sleep fairly early. We slept well if not for Patton waking me up from time to time to let me know that something was in the woods.

“Lay down and go back to sleep”

I would tell him as I put his blanket back over him. If it was a bear then it could wake me up itself.

We woke up around 8 and had breakfast and brokedown everything. By the time we had got that done it was about 9 and we were off on our way. It was quite cloudy and nearly everyone we saw on the way down was warning us about the rain. Luckily we planed a good time and mountain to do on a holiday weekend and there were not too many people out on the trails. On the way up we saw what I can only assume was a caterpillar.

After a quick hike we had gained about 3 miles and were passing the hut making our way for Galehead. The frost trail is not very long or demanding and we were soon at the top of our first summit for the day. The views on the summit are nonexistent but there is a great overlook in between the summit and the Galehead hut. 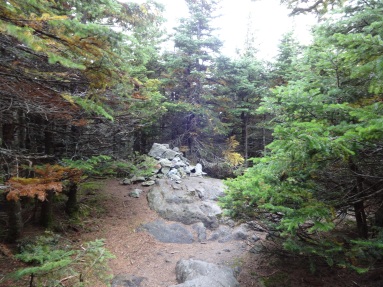 Views from the outlook 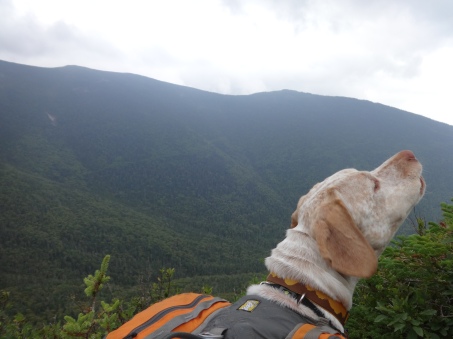 Patton working on his yodelling

Once we were done taking in the sights we made way for the hut where we had a snack and tried to guess what the weather would do. It was our goal to make our way across the ridge and go for Garfield as well, but would the rain hold out? It was misting at this point and the reports were calling for more of it. I stopped into the hut and got the Galehead hut pin to add to my collection. Only two more to go. We started to make our way back towards the junction wondering if we should go on to Garfield. It was around noon when we came to the junction when Nick said.

“I would not want to miss getting another mountain over 3 miles.”

On we went. Talking deeply as the miles passed. It was not raining very hard and to be honest if felt good as we made our way over the mountains in between the two four thousand footers on the Garfield ridge trail. I have done this hike before but in reverse direction. I felt as though it was much harder going this way. Once you get towards Garfield it gets pretty steep. Great times anyhow and we arrived at the summit of our second mountain of the day around 2. 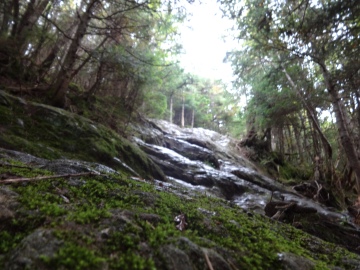 The rocky road to Garfield

Moons and the Ambassador

At this point the clouds were quite thick and growing darker in color. It was a little after 2 and we were making our way out on the Garfield trail. We really wanted to get out while we were still fairly dry. We made very quick time down the mountain and we had a short road walk back to the Gale River parking lot. It was a little after 4 when we arrived, tired and ready for a hot meal. For a day that was supposed to be very wet we managed to get out of it in pretty good shape. Patton slept all the way home while Nick drove. I somehow managed to lose my Galehead Pin that I had picked up that day, but Nick came through in the clutch and gave me his that he had picked up to keep my collection going. I owe him big for that one. These mountains made well for Nicks NH48 list as well as making number 34 for Patton. It was the 2nd time I have done Galehead and the 3rd for Garfield.