This week I go out solo on an attempt to traverse the Carters and the Wildcats. I fall short on the Wildcats but the weekend was still fantastic. Microspikes were on most of the time and my lack of snow shoes cost me two peaks. From here on out I would say the snowshoes are a must. Trail breaking and snow drifts make this hike a hard reminder of how the winter will alter your hiking plans at the drop of a hat. This weekend brought me a wide array of weather and a wonderful stay at the Carter Notch hut. Let’s get our hike underway…

This week my car was in the shop. I still needed to get out. After finding a ride up north I started planning. Originally I planned on staying out in my hammock using a couple of sleeping bags. Noticing the temperature drop Saturday night I decided against this. Looking at the hut I noticed the reduced rate and decided that I would spend the night there out of convenience. The forecast called for sleet and freezing rain. I decided I would not need snowshoes. The plan was to start at rt 2 and hike the whole traverse from Moriah to Wildcat D. Moriah through carter hut the first day and Wildcats Sunday meeting my ride at Pinkham notch center. My plans rarely go accordingly…

Saturday morning at 4AM Jeremy pulls into my driveway. It was nasty outside. Sleet and freezing rain. As we made our way north it stayed very nasty. I was happy to see change to snow as we got closer to Pinkham notch. I should have brought my snowshoes. With the bad weather I was debating the whole traverse. If I had any problems with Moriah I would be a long way from the hut and that could be difficult. I decided to start at Imp and cut out Moriah this time. I started hiking around sunrise. 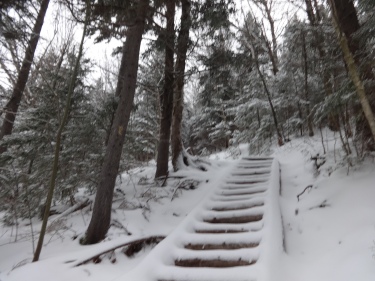 I was breaking trail right from the beginning. It was not very deep though. I made it up to Imp face and got some of the best views on my day.

Come to find out the first peak you summit on this ridge is Mt. Lethe which is on the trailwrights 72 list. Just in case anyone is interested in completing this list as well. sometimes there are great views from here, but not for me today. Onward to the Cartes. No views as I was completely clouded in. The trail was untouched and I was in snow drifts up to my knees at points. Rookie mistake on my part not bringing snowshoes. I trudged on. Made both the summits with little excitement. After South Carter I caught up with some footprints. 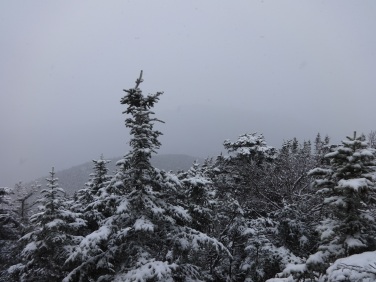 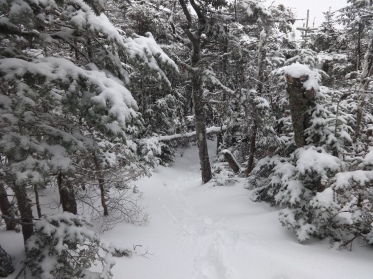 Shortly after the summit I run into the first people I would see all day. They were working their way to Middle Carter. From Zeta pass I would catch up with some more tracks until the Height split. I did not follow. With no views I figured I would skip Height. I moved towards Carter Dome and once again on top I could see nothing. I wasted no time making my way down towards the hut. I was pretty tired but still very motivated to make way to the hut. I had never stayed at a hut and was looking forward to it.

Once at the hut I met Dylan the caretaker who I had met a couple weeks earlier Patton’s hike of the Wildcats. I hung up my wet clothes and grabbed some food. Dylan made some spicy chickpea soup and I had a bowl. It was delicious. Slowly the people started to trickle in from their own adventures. We all made dinner. I was simple with my mountain house, but some got very involved and a lasagna was even made that night. They offered me a piece, it was delicious. We all had some strong drink and had a very merry evening. I fell asleep early that night comfortable in my 30 degree sleeping bag even though it was dropping down quickly in temperature outside. I could hear fierce winds all through the night. when I awoke it was a very different day outside. I would recommend the hut to anyone who wants to stay out, but does not have a solid winter setup like myself. 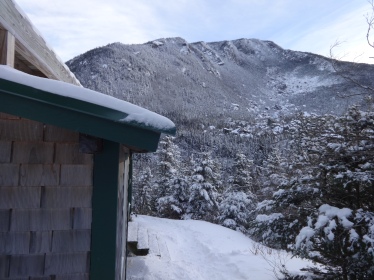 That next morning I went to the hut to have breakfast and get ready. It was really cold. around 15 degrees and the wind was blowing fiercely. Everyone met up and we had our food. I wanted to get going so I said my goodbyes and made way for the Wildcat ridge trail. Nearly right after the split I ran into heavy snow drifts. I worked past a couple of them, but I started to encounter some taller than I was. I struggled with one for nearly 10 minutes. Looking ahead on the trail I noticed more of the same. What a rookie move leaving my snowshoes at home! I should have been more prepared. Lecturing myself in my own head I decided I should probably turn around. I did, I did not want to but I did. Back to the hut I went for one more cup of tea.I was soaked already from my efforts on the trail. I only went three quarters of a mile. I gave my report to the attendance at the hut. I had a cup of tea and off I went again down nineteen mile brook. On the way down I first  ran into a couple of guys going for the Wildcats I told them my story, but they had snowshoes and were not worried. After I saw my friend Andrew who will finish his grid this month going for the same. He told me he would take his time and let the other guys break trail. We laughed and went on our way. Once at the parking lot I started road walking while I got ahold of my friend Jeremy. He did not hike Sunday and was close by. He picked me up in front of the Auto road where I grabbed these great pictures on the way out. Not exactly what I was shooting for but a great time to be sure. Winter is here. I won’t forget my snowshoes again…