Lucy and I return to the trails to try and take on the Kinsman ridge. Clear and well worn trails make for a smooth trip up to Cannon. Snowshoes were worn but not needed on the Kinsman Ridge section. The Kinsman Ridge over the Cannon balls prove to be a different story as Lucy and I get turned around on the first cloudy summit leaving us with only the single summit and a desire to find some blue skies.

Lucy and I woke up in the bed we made for ourselves in the back of our SUV. We slept like babies after our hike the previous day on the other side of the notch. The plan was to work the same area and get the Kinsmans and Cannon done. Lucy and I had breakfast and packed up. Right from the start of this hike we found a well worn trail. All the way to lonesome lake we made way quickly. Just past the lake it got a little more filled in but still well traveled. 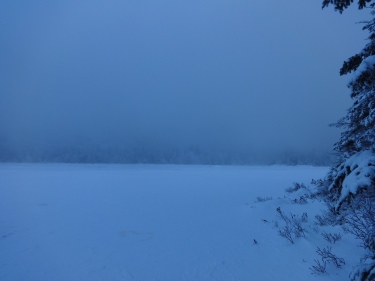 Once on the Ridge line I put on my snowshoes. It made life a lot easier. We plowed up the trail which gets steep for a time before the Hi-Cannon junction. The Hi-Cannon trail was warn and well used, but I had trouble seeing it on the way up. I noticed on my return that it was off the right at the beginning of the Lonesome lake trail, but did not have a sign. If you are looking for it look for the blue blazes that mark the trail. Once on the summit I only took a few pictures as there was no views. There was a strong wind though and Lucy wanted no part of the summit. The winds were making noises that seemed to scare her. 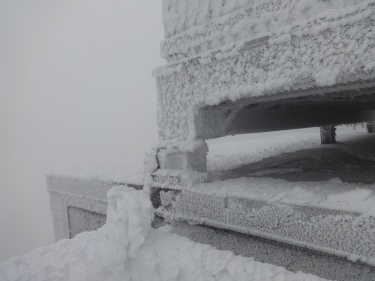 Time to get off the summit. We made our way down. The whole time I consider if I want to do the Cannon balls over to the Kinsmans. I start up the Kinsman Ridge trail. It was broken, but still hard going with my less than perfect snowshoes. It was a struggle. Just past the first peak on the trail the trail stopped. I stopped. I was not really in the mood to break trail for at least 2 miles. The clouds were still thick around us. I decided to turn around. We had only gone about a half mile. We went back to the Lonesome lake trail and made our way down. On the way down I ran into my good friend Jay who was taking a friend out on her first 4k hike. We chatted for a bit while I told him about the weekend so far.

“You doing anything else today?” He asked.

We parted ways. All the way down I though about doing something else. When we got to the car we ran into a large dog who had got away from the owners. We helped bring the dog back and the trip was over. I placed everything in the car and we headed south. As soon as we got on the highway the blue skies greeted us and the sun burned my eyes. Putting sunglasses on I realised that I just had to see some views today.

“You got another one in you?” I asked Lucy in the rearview.

She had no signs of wanting to sleep. We made our way to Waterville Valley and Mt. Tecumseh. I bet I would find my views here for the day… 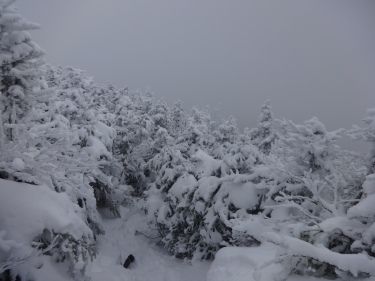