Some hikes are known for their grand nature. A presidential traverse is one of those hikes. Even in good weather this feat is difficult. A winter traverse would be quite a challenge, but it is good to aim high. The hike is a well traveled pack that is easy to traverse, but weather changes quickly in the White mountains and we are forced to make heavy decisions for finishing the hike. 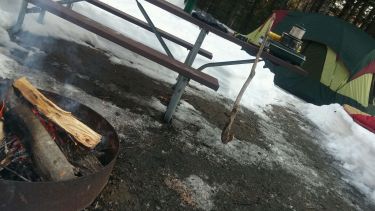 I picked up Abby Friday night. We made a base camp at Barnes Field. This campground is open all year and with close access to Appalachia it was a good idea to have this location for the early start. We planned on starting out early I had an alarm set for 4. My friend Jason Moorse was along for the hike and Abby and I had dinner with him at Moat while we discussed the details. We went over the details on possible routes we might take down if the weather got bad. We were allowing ourselves 13 hours to complete a traverse. We returned to base camp and went to sleep rather quickly. The winds had picked up quite a bit. It was unnerving and it was hard to sleep…

4:00 came quickly and the winds had not died down. They had broke Jays tent and he wa in his car. The reports called for a calmer morning and we elected to sleep and extra two hours. We got up at 6:00 and after gearing up we drove through Gorham stopping at Dunkins’ on the way. We fed Lucy in Appalachia parking lot while we talked over the day with another group of hikers going up Madison. We were finally on our way. The weather was improving while we hiked up Valley way.

We were cruising up Valley Way over well packed snow hardened by the heavy winds. In about 2 hours we were at Madison Spring. The wind had picked up a bit. I changed my wet shirt at the hut and put on my ridge set of cloths. We had a snack and prepared to summit Madison. We dropped our bags and made way for the top. It was an easy hike over the hard packed snow that covered the normal rock scramble to the summit. We reached the summit with winds hard hitting though not as cold I might have expected. This peak marked my 100th for the year and a great view to be had. 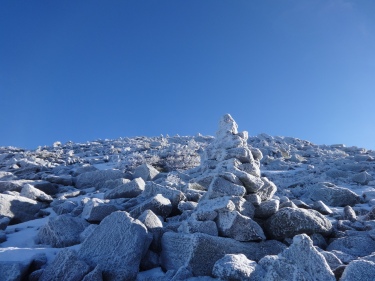 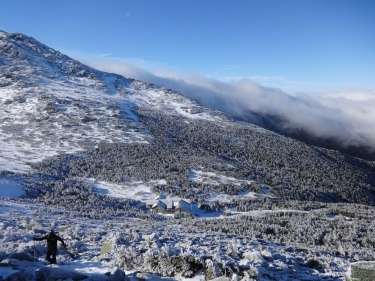 We move back to the hut and grabbed our bags. onward to Adams. We were making great time, but this hike just started. Adams is a real steep climb, but with the hard pack snow it seemed a lot better than what I am used to. We went down Gulfside to the furthest spur from Madison and dropped our packs again as we started to climb Adams. Without the weight of the packs we ran right up there and took in the views. It was still very nice out even in the high winds. 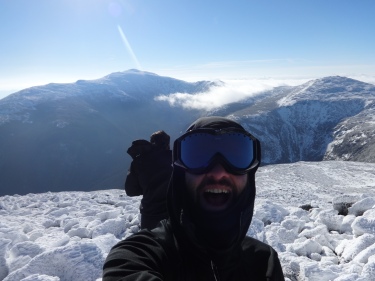 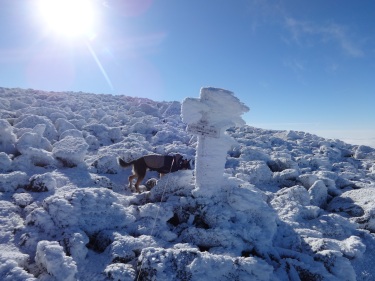 The sights were amazing. Looking onward at Jefferson we saw the clouds in the distance still below the mountain summits. We walked the Gulfside trail around Sam Adams. To Edmonds Col where we continued until the Six husbands trail to the summit of Jefferson. 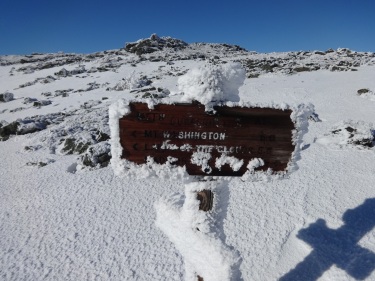 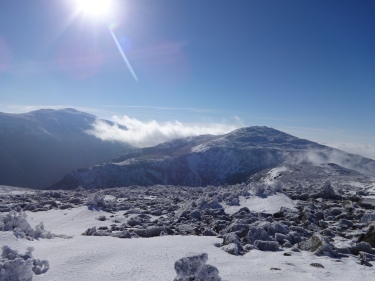 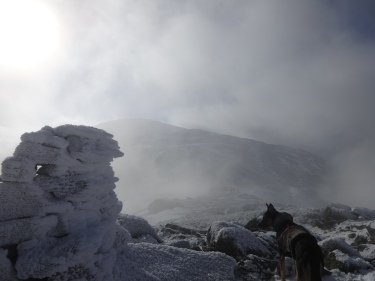 The clouds were starting to roll in. It became a bit harder to see the next point along the snow fields. We once again dropped our bags at junction sign. We made for the summit of Jefferson. This summit has always been in the clouds for me and today was no different. It was hard to see but at this point we were surrounded by the clouds. Once again no views on Jefferson. 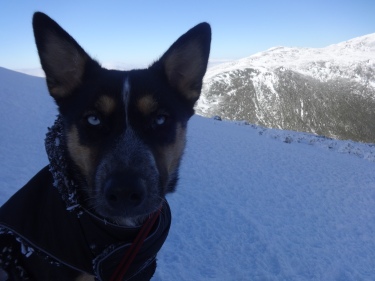 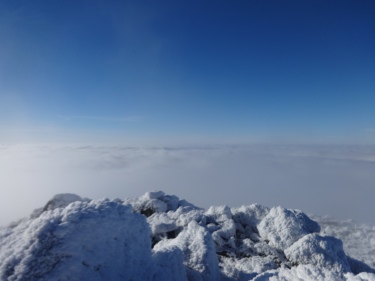 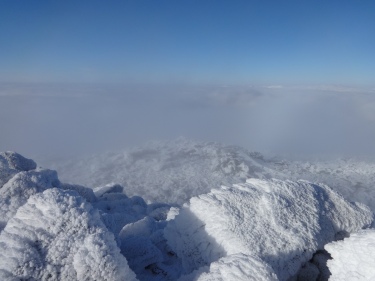 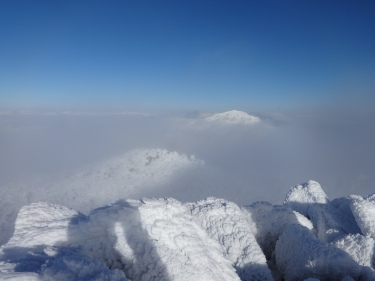 Once back to our bags we looked to the snowfields. It was hard to see. the clouds and the sunlight made a haze all around us. It was a dreamy atmosphere. We had to retrace our steps a couple of times. We did not have too much trouble navigating through it as clouds started to life again showing us the wall that was Mt. Clay. I had never hiked this trail so it was impressive. Washington was in our sights! 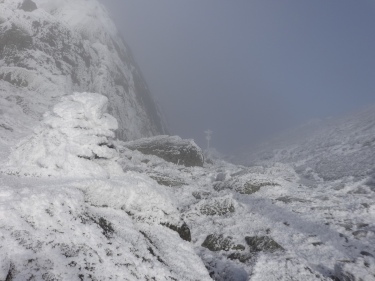 We now made the climb to Washington. We were feeling great. Along the Great Gulf we skirted the trail and finally crossing the railroad we gaining to the top. Once on the summit we had a brief window of clear skies before the clouds instantly took us and covered the whole of our vision. 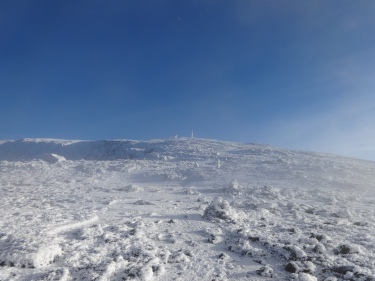 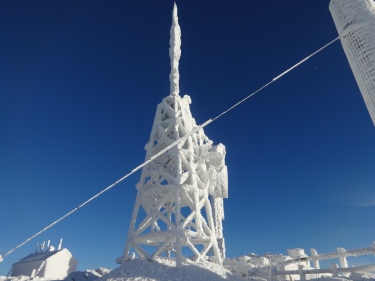 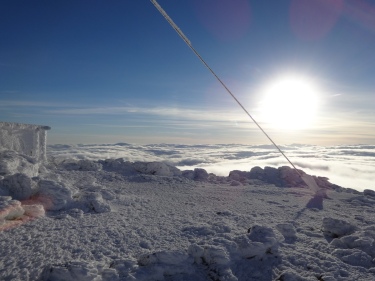 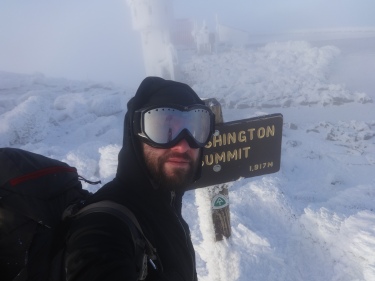 As the sun was going down the clouds rolled in. I have traveled the Crawford path off of Washington a few times now but as the haze settled it became very disorienting. We made it to the Lake of the Clouds hut and talked quickly. With evening coming and the visibility being so low we decided that it would be best to abandon our hike at Ammonoosuc and descend before dark. Lucy was covered in rime ice and I worried about her as well. We made quick time down. I called Abby and she met us at the Cog.

Could we have gone on? Yes we had the strength. We might have been fine. Lucy would have warmed up off of the summit of Washington. I think we had a great hike regardless. I like knowing I made a good choice than realizing I am stuck with a bad one. Abby picked us up and we celebrated our amazing hike as we made our way back to camp. We ended up calling our weekend short in the mountains. We packed up and made our way home a day early. In total Lucy and I grabbed 8 peaks and over 40 miles! It was a blast.