“Well I’ll show you the Shire before you leave.”
Were the last word I said to Tim over the phone. My friend was moving to L.A. in order to find more out of life than New Hampshire could offer at this point in his life, but he had never seen the mountans. I planned to remedy this before he was to leave. The kinsmans seemed like a wonderful place to take him and because I am a peak bagger well might as well make it a full day and get Cannon too. Away we go.

4 Am came early but Lucy and I were on the road quickly. We met Tim at his house and were on the highway by 5. We were meeting another friend of mine at the trailhead for 7. It was very cold out that morning and it was supposed to be a cold day overall. We were early to the trail head so we drank up on water and packed our gear. My friend Christoph met us and we were ready to go. We started a little after 7.

As we started to climb the trail we were warming up. We did not need any traction on the Lonesome lake trail. Lucy seemed to be just fine in her coat. We saw no one on the trail all the way up to the hut. Once at Lonesome Lake we took a short break.

The day was still very crisp. We started to hike Fishin’ Jimmy where we ended up needing our micro spikes, and Tim forgot his spikes at home! They would remain on the rest of the day. Tim managed all day with only and ice axe. The hike up to North Kinsman went quickly. Before long we were on the ridge making our way for the summit. Lucy was getting anxious when we stopped.

The look out on North Kinsman offered great views. Here we started to run into other groups hiking. There was a party of folks who had hiked the mount Kinsman trail from the west. 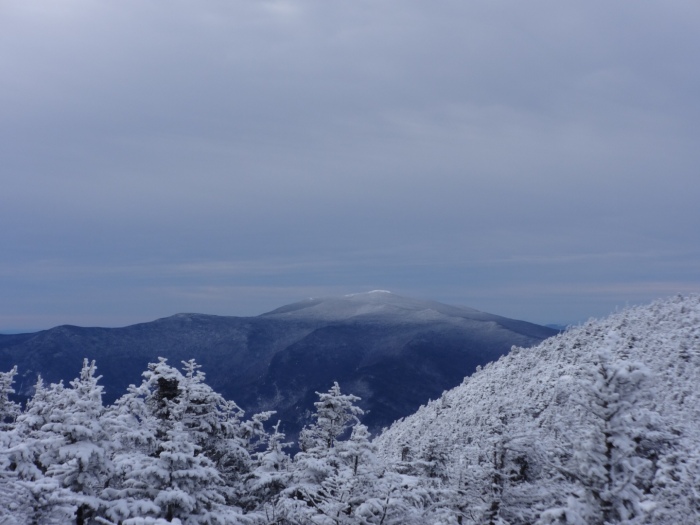 Onward to South Kinsman. The trail was still well broken out and the .9 went quickly. We reached the throne carrin and had another photo shoot. After we had a break and a quick drink. Lucy waited patently. On the way back we met a group from the 4000 footer page on facebook. Hello to George, Casey and Nancy and the rest of your crew! 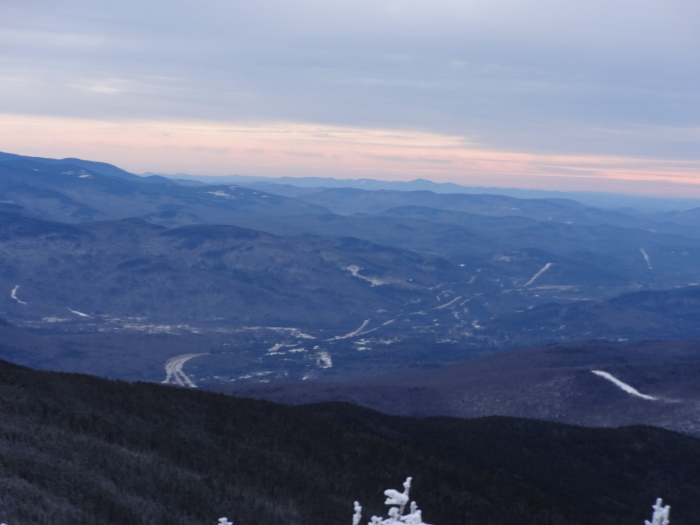 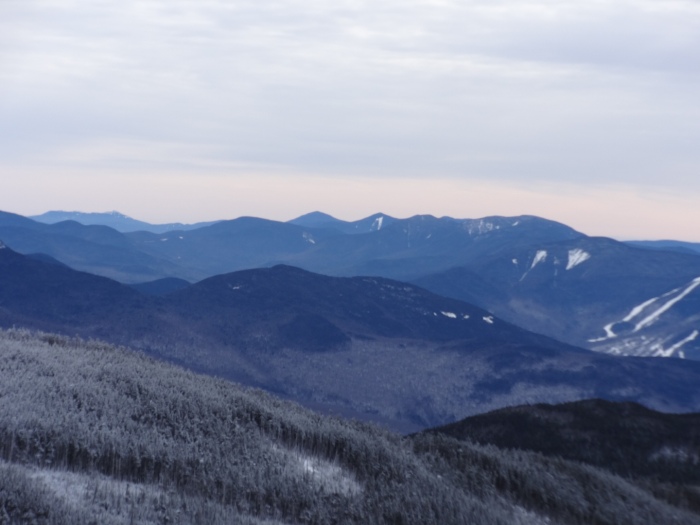 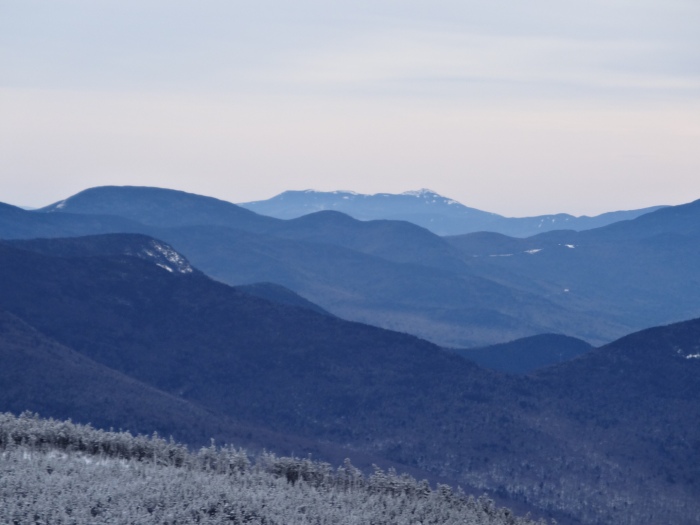 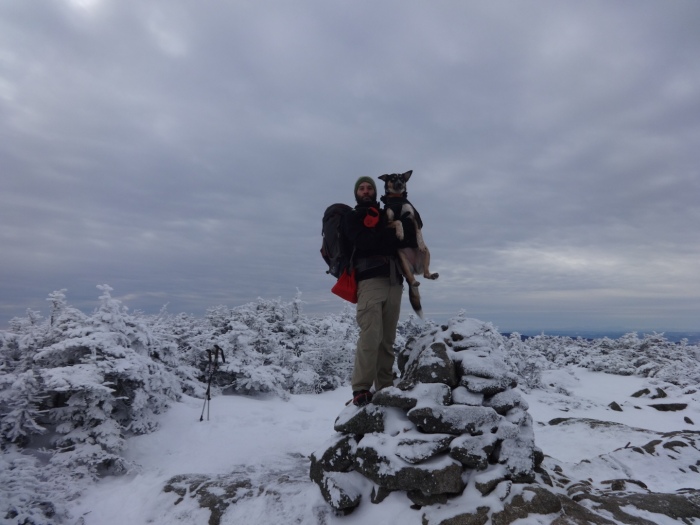 Now I have never been over the Cannon balls before. I knew from other accounts though that it was a bumpy hike over the 3 of them. I also knew from a couple of weeks ago that the last section up Cannon was a bit steep as well. It was like a rollercoaster. It was also a bit exhausting but we made it all in one piece. We were on the last strech past Hi-Cannon. There were a couple of groups on this section and we followed them up to the summit. At this time the snow was rolling in and the temps dropped. It was 0 on top with heavy winds. We quickly got our pictures and moved on. 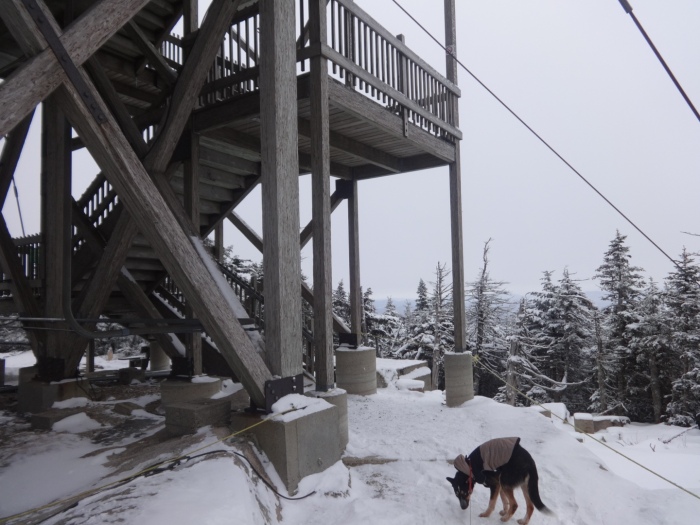 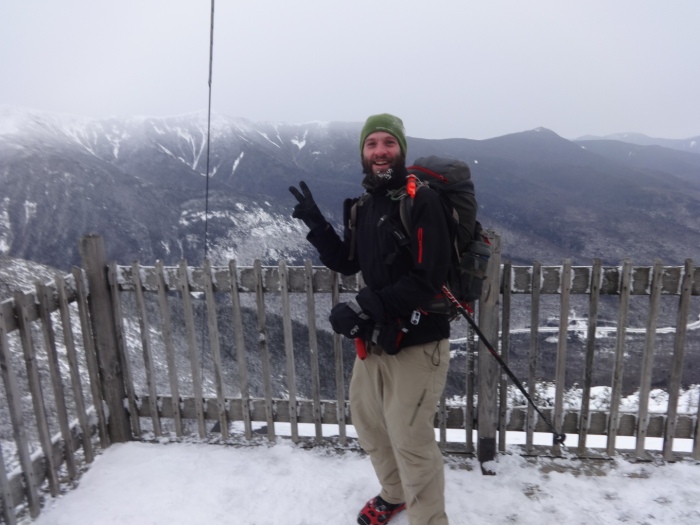 On the way down we took Hi-Cannon. It was well broken out and there were lovely views on the way down. We made it back to the parking lot just in time as the final light of the day was illuminating the parking lot. The snow was beginning to fall faster. We packed up and went on our way. On the way home we stopped with Christoph at our friends house Justin and Serena’s for a celebratory beer. They are trying to build a hostile just a short ways from the AT. It looks great. Expect to read more about it in the future…

Tim got his proper send off and the guy crushed this hike with very little gear. Kudos! It was proper that on the last day in the Shire he was able to learn the beauty of the state he had been living in but never truly knowing…

The first hike of 2015 is over and with freezing rain in the forecast I decided not to hike on Sunday this week. I now have 10 weeks to bag 27 peaks. It can be done, but it will have to wait till next week. See you then!