A exhausting day of breaking in snow all across the Northern Pemigewasset ridge. Deep drifts made for a slow going day that would test a lot more than just our gear. Five of us would set I out as a team to help each other break through the mess of trails and with more in the forecast this week it is clear that winter has taken a firm grip on the white mountains. Time to settle into the season with snowshoes and patience…

Abby and I woke up at 4 in order to pack up the truck and get the dogs ready. Grabbing Patton and Lucy we were on our way about 4:30. The dogs were still tired and slept for most of the trip. Abby and I got coffee for the trip and it went quickly. We were meeting the others at the end of Little River rd. We got there about 7:45. Shortly after a plow cleared the road. After that the rest of my hiking party arrived. My good hiking friends Jay Morse and Jason Beaupre were also joined by Tony and John who I had just met. I wished goodbye to Abby and she went to set up camp. Lucy was excited and very happy to start hiking as we traveled the bushwack towards North Twin trailhead. It was well broken out.

The trailhead looked promising but once we got to the Firewardens trail it was a bit dicier. There was one person in front of us breaking trail and he was a sport he did it for most of the trip. Another gentleman would join us for the breaking party as we struggled up the trail to North Twin. We did not stop there for long as the overcast had settled and there were limited views. 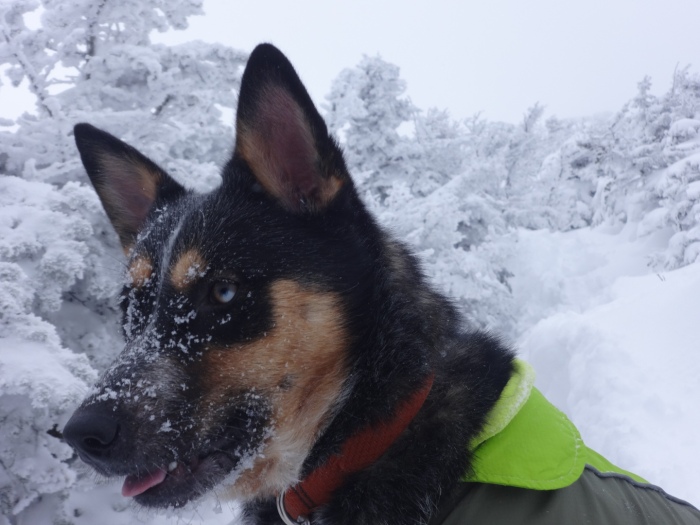 Breaking was slow going right from the start but the other guys that were on the trail did most of the breaking on the Twins and I was very thankful for that. If you guys are reading this then I appreciate it! It took us about 3.5 hours to get to South Twin and it felt like it. One of the other guys named Jeff caught this great picture of our crew. 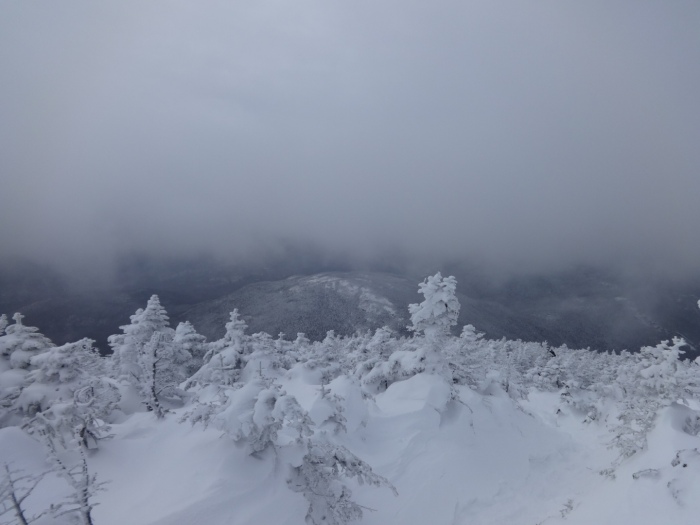 With little to see on South Twin we made way down the Twinway to Galehead hut. It was a quick .8 and we got the best views of the day from the hut and the lookout on the frost trail on the way to Galehead.

Morse with South Twin the the rearview 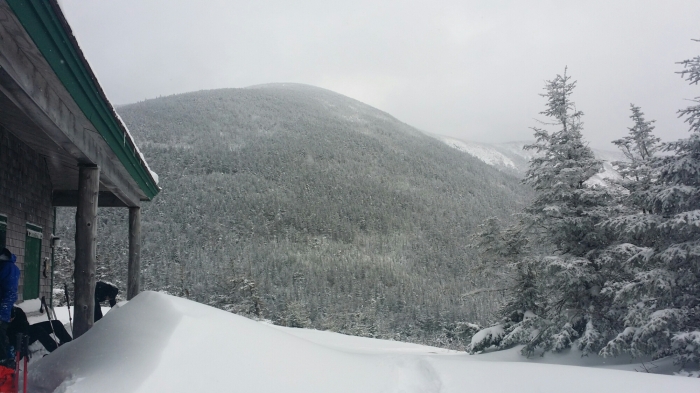 After the hut John decided to take Gale river trail back to his car. We would miss him from the breaking party but it was understood. Part of me though to follow but with less than 3 miles to Garfield I just had to try. I did not want to come back to solo it later. The Garfield Ridge trail was a hike all its own though and I might soon regret my decision. 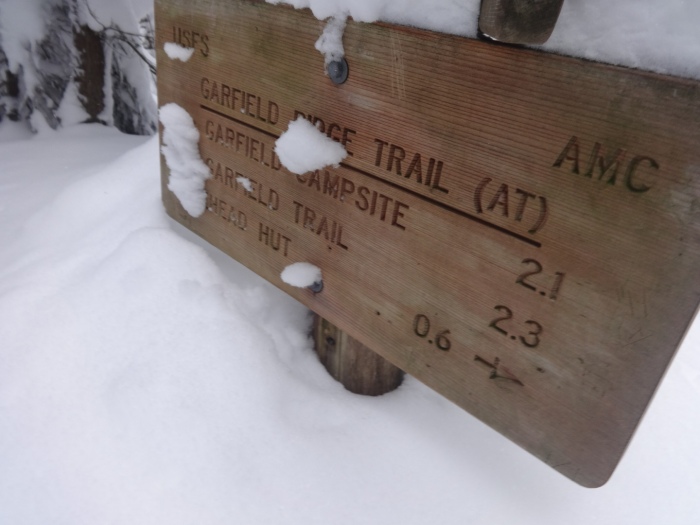 The trail was completely snowed in and it would take us nearly 3 hours to work our way over to Garfield. We had a 4 man rotation on trail breaking and it was slow and exhausting work. Be careful as you close into the junction to 13 falls as it gets a little cluttered in the area. By the time we reached the junction to Garfield trail it was dark. We would summit for only a moment and I had to leave my clothes were frozen and I needed to change layers. Thankfull the trail was broken out at this point and we made great time out of there finishing over 12 hours from when we started. It was one of the hardest hikes I have had to date but we did it and I was proud of the whole crew that made it happen. You guys and girl rock! 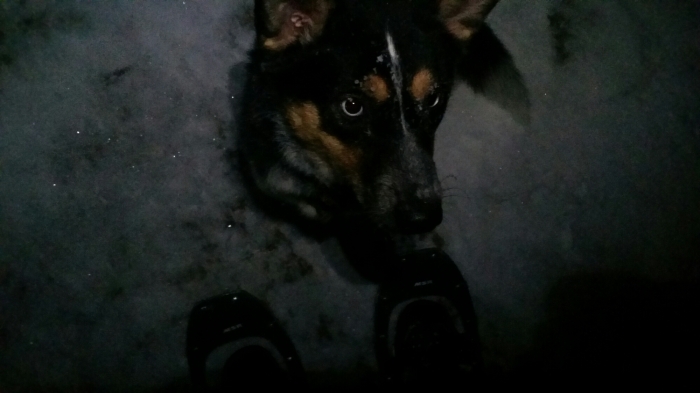 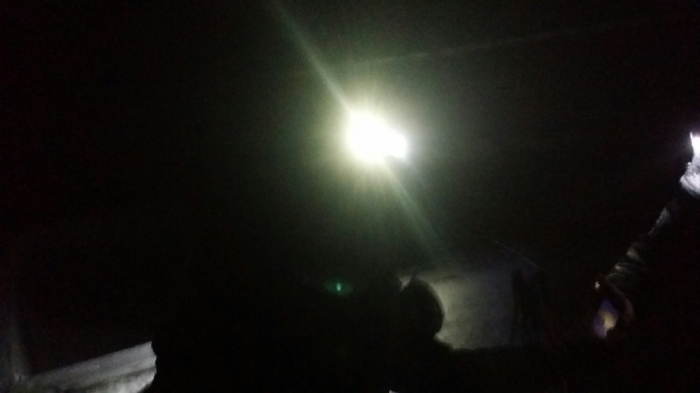 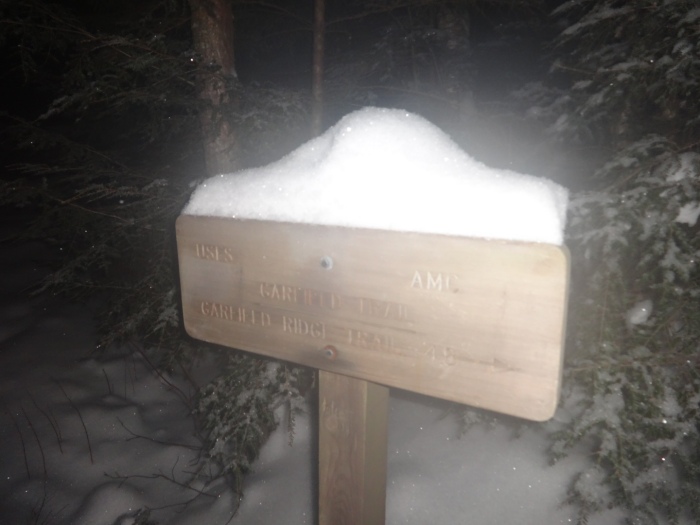 This hike brings Lucy and I to 34 on the winter! With the strenuous nature of the hike I decided to take Sunday off for Lucy and my sake. It was still a great weekend and with 5 weekends we only need 14 more to finish in time. The countdown to spring begins!!! We will see you all next week!