As Lucy and I come closer to our goal of a single winter season 48 so too comes the end of winter. With time running out it is as important now than ever that we get out there and cross peaks off our list. With 11 peaks to go the heat is on for us to get moving if we want to finish in time. Luckily  the weather is on our side as warmer temperatures roll in after the frigid cold of previous weeks. A welcomed change of weather acts as motivation over the many miles separating Lucy and her 48.

The weekend started now with a hike, but with a mechanic appointment. I suppose if I want to get to the mountains I need to make sure the vehicle is in tip top shape first. I had a loud hub bearing luckily I have the best mechanic in the Shire and he had it done by around 10. I was on my way up north shortly after.I stopped by the Basin parking lot to try and find the bushwack but I was not successful. I gave up walking down the Pemi trail after only a short time though because I did not like having Lucy near the snowmobiles. I arrived in the Whitehouse parking lot around 1. Lucy and I were all geared up and ready to hike shortly after. It was a bit colder than I expected so I put Lucys coat on to keep her comfortable. The parking lot was fairly filled so I knew the trail would be packed out. Knowing this I decided that my unaltered snow shoes would suffice. On we went. 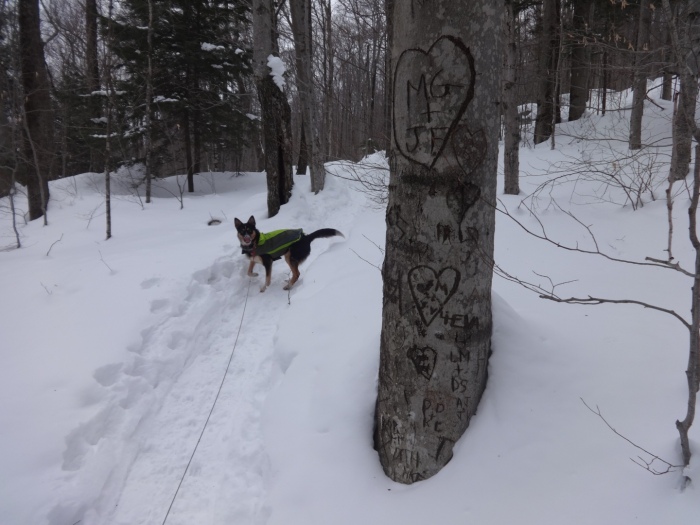 It was in fact a highway. There were lots of folks out today and the trails were showing it. Even the trail from the Basin that I was unable to find was well broken. I ran into many groups of folks in the way out, but all said they decided not to go to Flume and that it was not broken. My heart sank a bit with each news update, but we were going to make it if it took all night I kept telling Lucy. 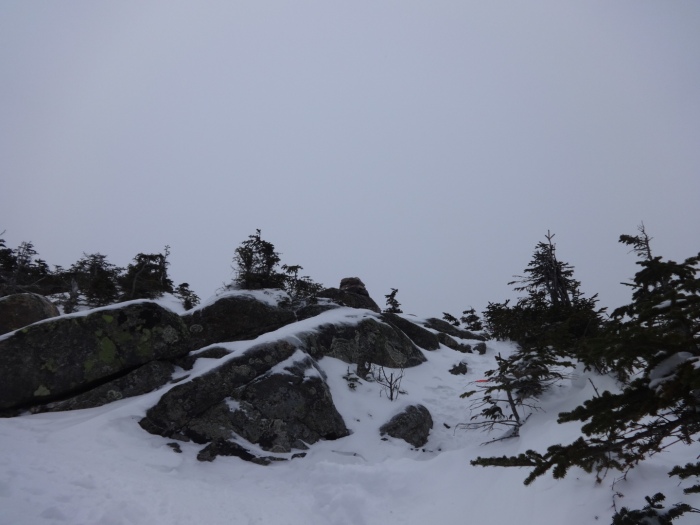 Sure enough when we started past the summit of Liberty there was a pack of snow about ankle deep. Not a big deal at all so we started making way towards Flume. Then to my surprise about half way there I saw a group.
“I’ll meet you halfway.” I said with joy.
“You must be Lucy!” The leader said.
“Are you Brent?” She asked.
I told her that I was and she went on to tell me how we had mutual friends and that she had red my writeups in the past. We talked for a few moments and I thanked them for the trail break. My time to Flume was greatly increased after that. When we got to the summit of Flume it was bitter cold with the winds and I could only take a couple pictures before my hand froze up. 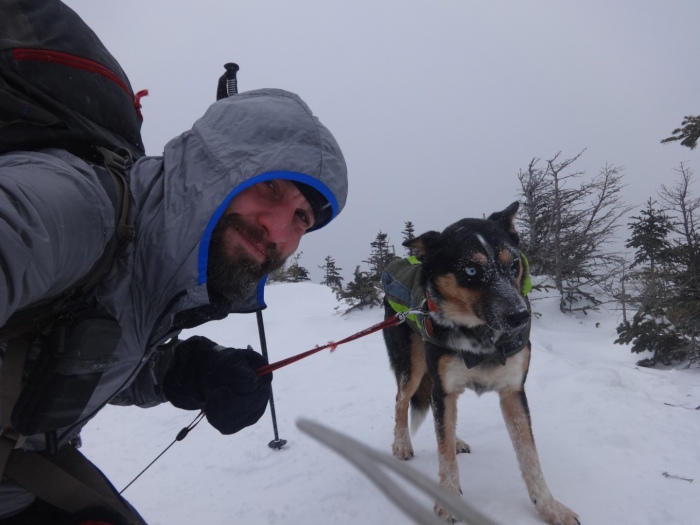 We started the hike back to Liberty. This time I actually went to the summit but again the heavy winds kept me from staying too long. There was snow falling at this point and the wind made it feel like sand blasting on the exposed skin on my face. That was enough alpine living for one day.

The hike down was quick and easy. We caught back up with our trail breaking friends further down the trail. I gave everyone a hearty goodbye as Lucy and I went to the car. I contemplated grabbing my overnight set and starting up Bunnell notch to Cabot that night to sleep in the cabin so we wanted to make time up north to the trailhead off of route 110 so we had to hurry. We made it back to the car before sunset. A really good hike time for such a late start. The entire hike took us about 4:45. 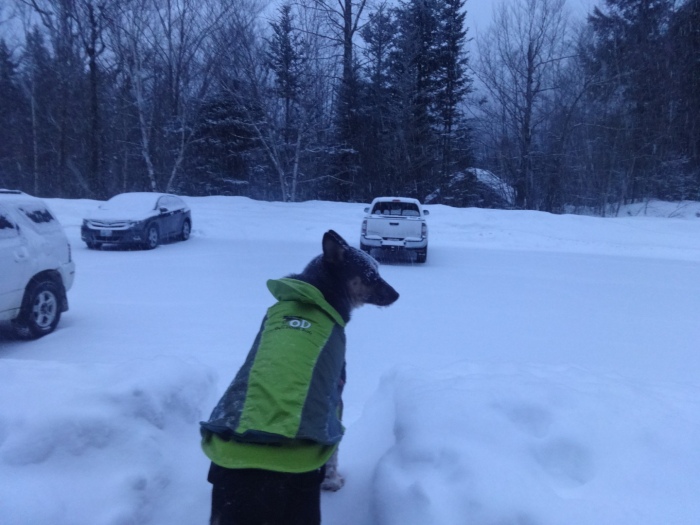 We packed up the car. It was a decent drive to the Bunnell notch trail head and it was snowing moderately. We stopped at the Irving in Gorham to grab a thermos of hot water and a hot chocolate but we did not waste any time in out travels. Once at the trailhead I decided that hiking up that night was beyond the scope of my ambition so I crawled in the back and fell asleep next to my hiking partner. We slept soundly through the night.

Lucy and I woke up a little after 5. I started the car and made us some breakfast. Lucy did not eat. There was a single car in the lot left from the day before. After packing up we were on the trail around 6. I was using a head lamp for the first mile or so while the sun was trying to break through. The trail was broken except for 6 or so inches of fresh snow that fell over the evening hours. It was fairly easy going.

Onward and upwards we climbed through Bunnell notch. It was steady going when we ran into the only other person in the lot. We met about a mile short of the Kilkenny junction. He had spent the night in the cabin but did not summit Cabot. I thanked him for the trail break and we started a steady climb towards the cabin.

Once there I dropped my bag and made for the summit. It was exhausting breaking that last .5 mile or so and I got turned around a couple of times because it all looked the same. If you are up there the next couple of days stay left at any forks I made up there. Finally I found the sign and the summit just a few yards past it. I could not find the tree with the marker because of the snow, but someone stole the marker this year so it would not have made much difference anyways.

We backtracked to the cabin and took a short rest before making our way down. Lucy was bleeding a bit from her paws and though it was not painful to her she took this time to clean them out before we started down again. 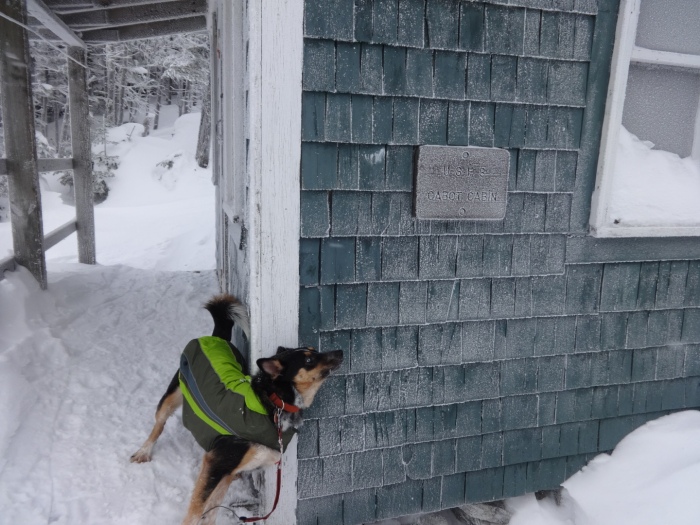 All the way down we saw no one. Back on Bunnell notch trail I started to think to myself.
“I hope someone takes advantage of this well broken trail.”
It is a long hard hike to Cabot this time of year and to have a trail like this is a blessing. Just then I saw a couple coming up the trail. We stopped and chatted for a moment about the conditions and they were very happy about the trail breaking work put in ahead of them. Lucy and I finished the hike around 11:30 as the sun was poking through the clouds. 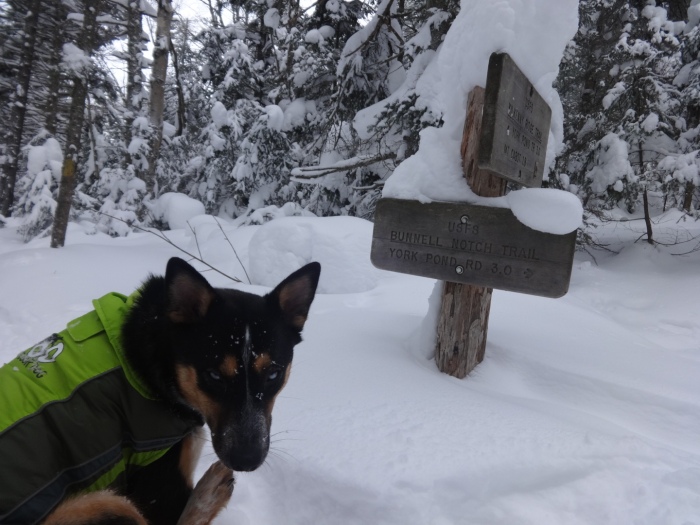 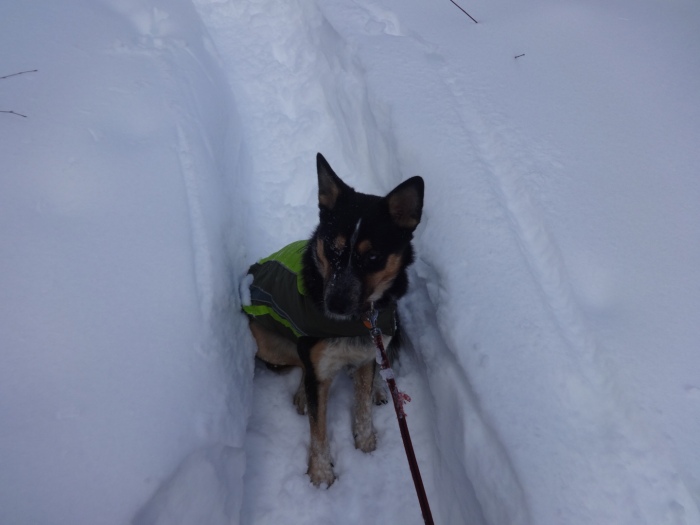 With that hike over we had some lunch. Lucy was still not very hungry but I had been feeding her salami on the trail. I was tired but being as far north as we were I just had to try and get Waumbec too. We made the drive over and were at the trailhead around 1. We parked across the street and walked up the road to the trailhead. After some food and a little break I was feeling more up to the task. Lucy was as ready as always with her tail in the air. It was so warm that I even let her hike without a coat. She was a happy girl.

It was a strait forward hike. Lucy and I were going at a great clip. I was sweating heavily in what seemed to be a heat wave. My thermometer was reading 25 which was a lot warmer than the past few weeks of hiking. We ran into a few groups on their way down and I learned that the trail was well broken to Waumbec which made me happy. I shared my information on Cabot with a couple who had planned on hik I ng it in the next couple of days. The gentleman was 37 mountains into his single winter season 48. Good luck sir! We reached Starr King and the lookout was cloudy. I dropped my bag here. Lucy and I made it over to Waumbec in great time. 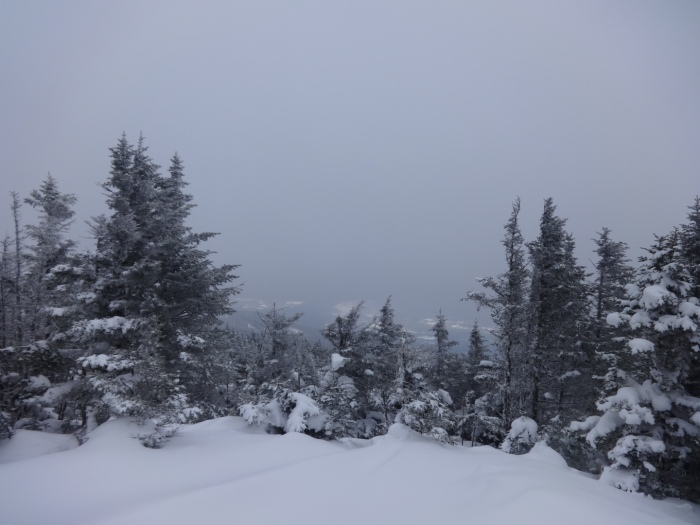 With the final summit of the weekend under our belts we wasted no time getting off the mountain. We backtracked to Starr King. I grabbed my bag and tried to get one more picture from the viewpoint. Don’t forget to get the top of Starr King just around the bend. It is a little off the trail on the way back down. In between the final climb in the trail and the clearing where the chimney is found. 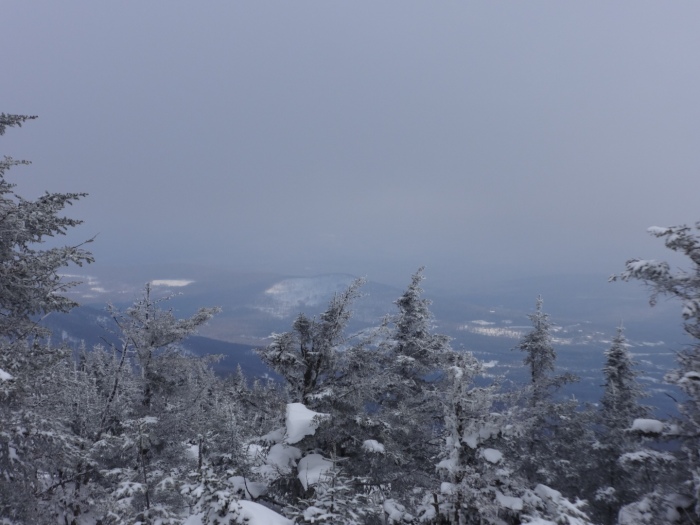 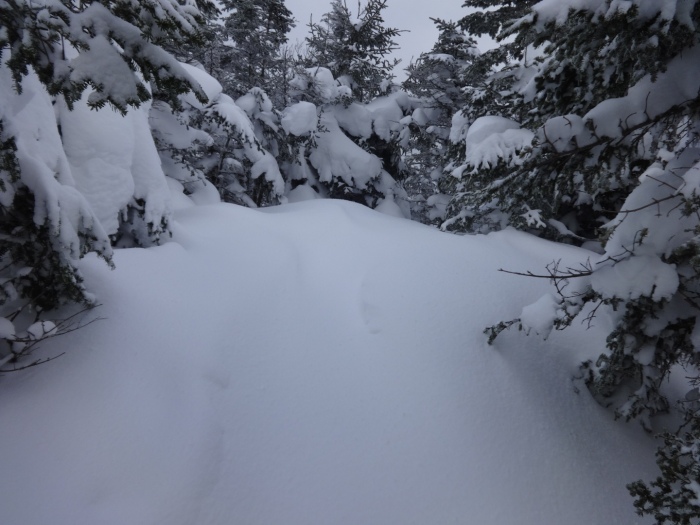 We were jogging down this one. I was beat and Lucys paws were all jammed up. We finished the hike in a little over 3 hours. It was a great finish to our weekend. I really needed it too. Sometimes the only thing that calms me down is the mountains and this week it was greatly appreciated. 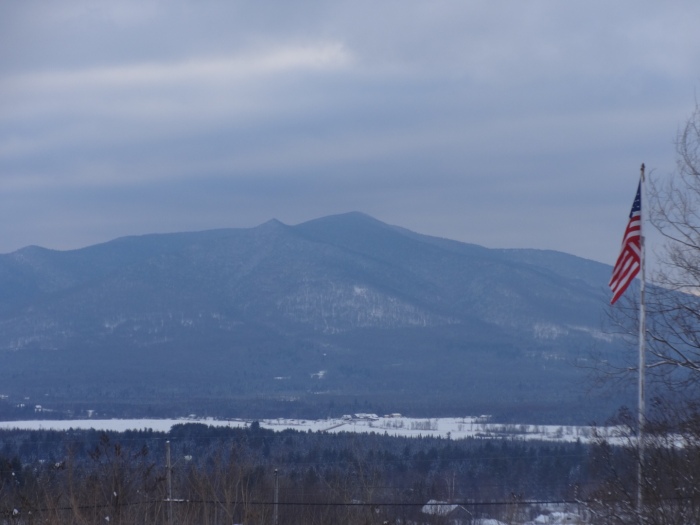 With this weekends hikes Lucy and I reach 39 mountains towards our goal of a single winter season 48! With 3 hiking weekends left we are on the home stretch but the crunch is on. We now have Owl’s head, Carrigain, the Carters, the Cats, Passaconaway, and Whiteface remaining. Lucy is always ready to go though and I am confident that we will make it in time. Keep reading to find out how we do. See you all next week!